A Part of the Nova Scotia Museum

History of the Mill

A Mill, a Railroad and a Community

The Sutherland Steam Mill was established in the early part of the 1890s by Alexander Sutherland. Mr. Sutherland, a carriage maker by trade, was approximately 30 years of age at the time.

The site at Denmark, Colchester Co., was ideal since the coming of the railway in 1890 had sparked the growth of this small community.

The first mill was a portable unit supplied by George White and Sons of London, Ontario and was destroyed by fire before it was completed. A new mill was started and finally finished in 1894. This is the mill we see today.

Soon brother Thomas joined Alexander and concentrated on his specialty of house building. Examples of Thomas Sutherland's work in the Denmark area include the Alexander Sutherland house & the Community hall. A 1902 directory advertisement bills the company as "Sutherland Bros, & Co., sash and door factory". By this time the industry was producing carriages and sleighs, windows and doors and providing general woodworking and custom work services. 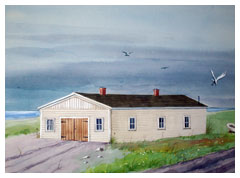 Generally the business employed 4 to 5 people on a year-round basis with an extra 9 hands hired on for the spring cut when the logs which had been delivered by farmers over the winter were sawn. The capacity of the sawmill was up to 12,000 bd. ft per day. Employees were paid $1.00 for a 10-hour day, six days per week.

The Sutherland Mill was a small community industry catering, for the most part, to a local market by processing local raw material. Logs were supplied from the community and the work force came from the neighborhood. Early account books document the operation of a barter system where logs were exchanged for lumber and other materials or services of the mill were exchanged for farm produce.

In 1900, the mill supplied the Brule Foundry with wood for school desks. The iron castings for the desks had been made at the foundry and the desks were supplied to the local school. 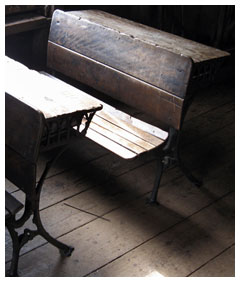 Much of the equipment in the mill was built by Alexander Sutherland. Examples include a table saw, cut off saw, mortising machine, 2 band saws, a belt sander, horizontal borer, a disk and drum sander and a lathe. A blacksmith shop was maintained on the mill site where repairs and fabrications could be carried out. The nearby Brule Foundry was a convenient source of cast parts made from molds crafted by Alexander Sutherland.

The sawmill equipment installed in 1952 was built by Oxford Foundry Ltd. Of Cumberland Co. Other machinery in the mill was built in Ontario or elsewhere and almost always purchased secondhand.

Like the woodworking and sawmill equipment, much of the steam equipment had local origins. The boiler was built by I. Matheson & Sons of New Glasgow.

The large steam engine used to power the sawmill was purchased in the 1890s from a failed copper mine at Waugh's River.

The Robb engine which powers the woodworking shop was built in Amherst.

It was bought from Robb in 1904 by James Eastwood, a jeweler in New Glasgow. Wilfred Sutherland purchased it from a fish plant in 1951. A small engine in the mill which is used to pump water for the boiler was made by a cousin of Alexander Sutherland in Westville to power a metal turning lathe. 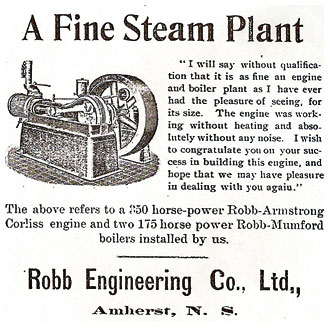 During the Second World War, the company participated in the export trade to England and shipped lumber by rail to Pictou where it was loaded on freighters for overseas. After the war, there was a boom in lumber and mill work for cottage construction in the Brule Shore area.

In later years, building supplies such as asphalt brick siding and metal roofing were retailed from the mill.

In 1958 the mill was closed. At this time, the mill was being operated by Wilfred Sutherland, son of Alexander, who had joined the firm in 1930 at age 16.

The Nova Scotia Museum purchased the mill in 1975. After extensive repair and preparations the mill was opened to the public in 1979.

Come for an hour or stay for the day.  The choice is yours with a Nova Scotia Museum Annual Pass.